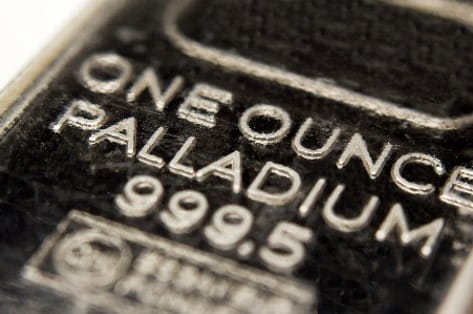 This article aims to provide insight into some issues regarding the future supply of essential minerals that are needed for the global adoption of environmental sustainability.

First, let’s talk about palladium (Pd) and how it relates to the subject of environmental sustainability.

Palladium (one of six ‘Platinum Group Metals’ or PGM’s) is used in catalytic converters as the main element that reduces the harmful emissions being released into the atmosphere that originates from cars and trucks. In India and China, the constant smog that lingers in and above the busy streets of highly populated cities has been dramatically reduced with the introduction of emissions regulations in recent years. Auto-catalysts (a common term for catalytic converters) account for approximately 80% of global Pd demand. As emissions regulations continue to tighten around the world, the demand for auto-catalysts and therefore, palladium will only increase. Although fully electric vehicles (EV’s) require no palladium as they do not emit any exhaust, ‘hybrid vehicles’ (vehicles that operate using both an internal combustion engine (ICE) and electric motor) require a higher Pd loading than conventional ICE vehicles. For more information on the science behind palladium’s use as a catalyst for emissions control, you can view leading auto-catalyst producer Johnson Matthey’s webpage on the subject here.

The price of palladium has experienced serious gains in recent months and is up over 55% year-over-year (YoY) at USD$1564/Oz on July 4, 2019. Additionally, sister metal rhodium (Rh, a PGM also used extensively in auto-catalysts) is seeing consistent price increases this year and is up over 40% year-to-date (YTD) at USD$3330/Oz due to supply concerns (July 4, 2019). There are multiple reasons for this, with the most significant being there is no replacement for either metals’ use as a catalyst, no technology or differing metal can match Pd and Rh’s ability to catalyze dangerous emissions into less harmful gasses. The majority of Pd and Rh supply originates from countries that experience frequent socioeconomic and geopolitical issues (South Africa, Russia). Also, it is important to mention that supply is most often obtained as a by-product of mining other metals platinum (Pt) or nickel (Ni) meaning mining companies have limited ability to ramp up production. Palladium content in the earths’ crust is said to be 30 times more rare than gold content. However, despite the nature of the reasons mentioned behind palladium’s dramatic price movement in recent months, there is speculation that similar imbalances could also occur in the markets of other metals that have important roles in achieving environmental sustainability.

Platinum (another sister metal of Pd) has historically been used in the auto-catalysts of both passenger and commercial vehicles that operate using the combustion of diesel instead of petrol (gasoline). Although the ‘dieselgate’ scandal in 2015 caused many consumers to stop purchasing vehicles that run using diesel, it will be a long time before the less-refined fuel gets phased out from being the primary source of energy for commercial purposes. Fuel cells, which convert hydrogen into electricity may someday replace diesel as the most common source of energy used for commercial purposes. Fuel cell technology requires the content of at least a few grams of Platinum. The shift towards renewable energy, the electrification of transportation and other similar “green initiative’s” will result in increased demand for certain metals that have not been previously used anywhere near as extensively as they will be going forward. The shortage or deficit of palladium supply has caused prices of the metal to skyrocket in recent months, which raises the spectre that other important metals used to develop eco-friendly products may not be able to keep up with demand. If this were to happen, the cost of environmental sustainability might be higher than what could be considered reasonable — meaning worldwide adoption and use of these products might stall.

The negative issues that have historically been related to mining activities (dangerous working conditions/pollution) and ever-increasing options to invest in have over time led to decreased interest from investors and institutions in the mining industry. There is growing stigma attached to investing in industries that harm the environment. The ‘boom and bust’ cycle that many commodities experience in addition to heightened investor awareness of the negative issues associated with mining has caused most mining companies to be more cautious with their capital in recent years.

Mineral exploration and development companies, which (at least in North America) usually seek funding on Venture Exchanges have also been having a difficult time when trying to raise funds. Investor sentiment towards the major mining industry trickles down to the junior miners, which means a large percentage of mineral projects are either currently underfunded or not even being discovered. The increased competition for highly speculative investment dollars in recent years has exited the resources industry and been rerouted towards emerging markets such as cannabis and blockchain that have been garnering more coverage by the media.

Typically, the mining industry and its participants will not increase the scale or number of projects for a specific mineral until there is a reason to do so, mainly the economic viability of a project and its scale. The exploration and development process will take most companies 3-5 years to justify commencing or expanding production (if economically feasible), so the response to an increase in demand is usually not immediate. For palladium, even in the face of increasing demand and reoccurring annual deficits during previous years, the appropriate investments were not made to bring additional supply online.

The uncertainty surrounding the speed of global adoption for “green initiatives” at the national, corporate and consumer level leads to a lack of investment in the exploration and development of essential minerals for future use. The ‘boom and bust’ cycle may only become more exacerbated in the coming years as technology advances, and companies can develop and produce life-changing products at a faster and faster rate. Tesla, for example, has recently announced that the company is considering entering the mining industry in some form due to the fact executives are unsure they’ll be able to acquire all the much-needed materials used to produce electric cars.

Going forward, the leading mining companies will be the ones that have realized times are changing and are acting accordingly. The number of fiscally and ethically responsible mining companies is growing, improving their image by adopting corporate social responsibility guidelines and using modern strategies for marketing company goals and achievements. Many governments are now taking a larger role in the extraction of national resources, as a result of catastrophes (ex. Vale’s Brumadinho tailings dam bursting in Brazil) in addition to recent political and societal issues (ex. Rare Earths/Lithium in U.S.-China trade war, jobs/government coffers in African nations).

When investing in mineral projects and mining companies, investors have more to gain than just their return on investment. Investors in resources are contributing to the global economy by enabling companies to scour the earth and extract from it the resources needed for our daily lives. As the industry continues to change for the better, investors will likely be more willing to provide the required capital for global development and environmental sustainability. The big question is, will the industry leaders be able to attract the much-needed capital for developing the mineral projects and mines of tomorrow?

New Age Metals Inc. “New Age Metals”, has taken all reasonable care in producing and publishing information contained on this web site, and will endeavor to do so regularly. Material on this site may still contain technical or other inaccuracies, omissions, or typographical errors, for which New Age Metals assumes no responsibility. New Age Metals does not warrant or make any representations regarding the use, validity, accuracy, completeness or reliability of any claims, statements or information on this site. Under no circumstances, including, but not limited to, negligence, shall New Age Metals be liable for any direct, indirect, special, incidental, consequential, or other damages, including but not limited to, loss of programs, loss of data, loss of use of computer of other systems, or loss of profits, whether or not advised of the possibility of damage, arising from your use, or inability to use, the material on this site. The information is not a substitute for independent professional advice before making any investment decisions. Furthermore, you may not modify or reproduce in any form, electronic or otherwise, any information, images and maps on this site, unless you have obtained a written permission from the management of New Age Metals Inc.