Previous exploration on the Sheep Hill massif in the central part of the Genesis project revealed stratabound sulfides over an 800 metre strike length, with consistent PGE-Cu-Ni metal grades over multiple meter intervals, including 6 metres grading 804 ppb platinum and 1,018 ppb palladium, and 12 meters grading 5,938 ppm nickel. There has been no drilling on this district-scale project and the strike and depth extent of Ni-Cu-PGE mineralization remains open to expansion. The geophysical signature of the Sheep Hill mineralization is strongly magnetic and moderately conductive. The first-ever application of ASTER and LANDSAT8 imagery over Sheep Hill shows a remarkably consistent correlation between a distinctive strong iron oxide alteration signature and the geological and geophysical trace of the previously discovered PGE-Cu-Ni sulfide mineralization hosted by a dunite-lherzolite unit (Figure 1). ATSER and LANDSAT imagery revealed at least two other sub-parallel alteration zones adjacent to, and east of the known PGE-Cu-Ni mineralization at Sheep Hill. These two zones are separated from each other and the known Sheep Hill zone by talus fields composed of unaltered and unmineralized ultramafic rocks that lie upslope from the PGM-Cu-Ni mineralization. Combining ASTER and LANDSAT8 results with airborne magnetics and resistivity data indicate the total length of the stratabound PGE-Cu-Ni mineralization on Sheep Hill is at least 2,000m and open under alluvial cover in both strike directions.

At the adjacent Bernard Mt. massif, centered about 7.5 kilometers west of Sheep Hill, ASTER and LANDSAT8 results combined with airborne magnetics and resistivity data indicate a well constrained northeast trending band of conductive and magnetic iron oxide alteration extending for at least 2,250 metres along the south flank of Bernard Mt. (Figure 2). The stratigraphic position, ASTER and LANDSAT8 alteration and airborne magnetic and resistivity signatures are identical to those at Sheep Hill. Unlike Sheep Hill, there has been virtually no prospecting, mapping or geochemical sampling along the prospective target horizon at Bernard Mt. 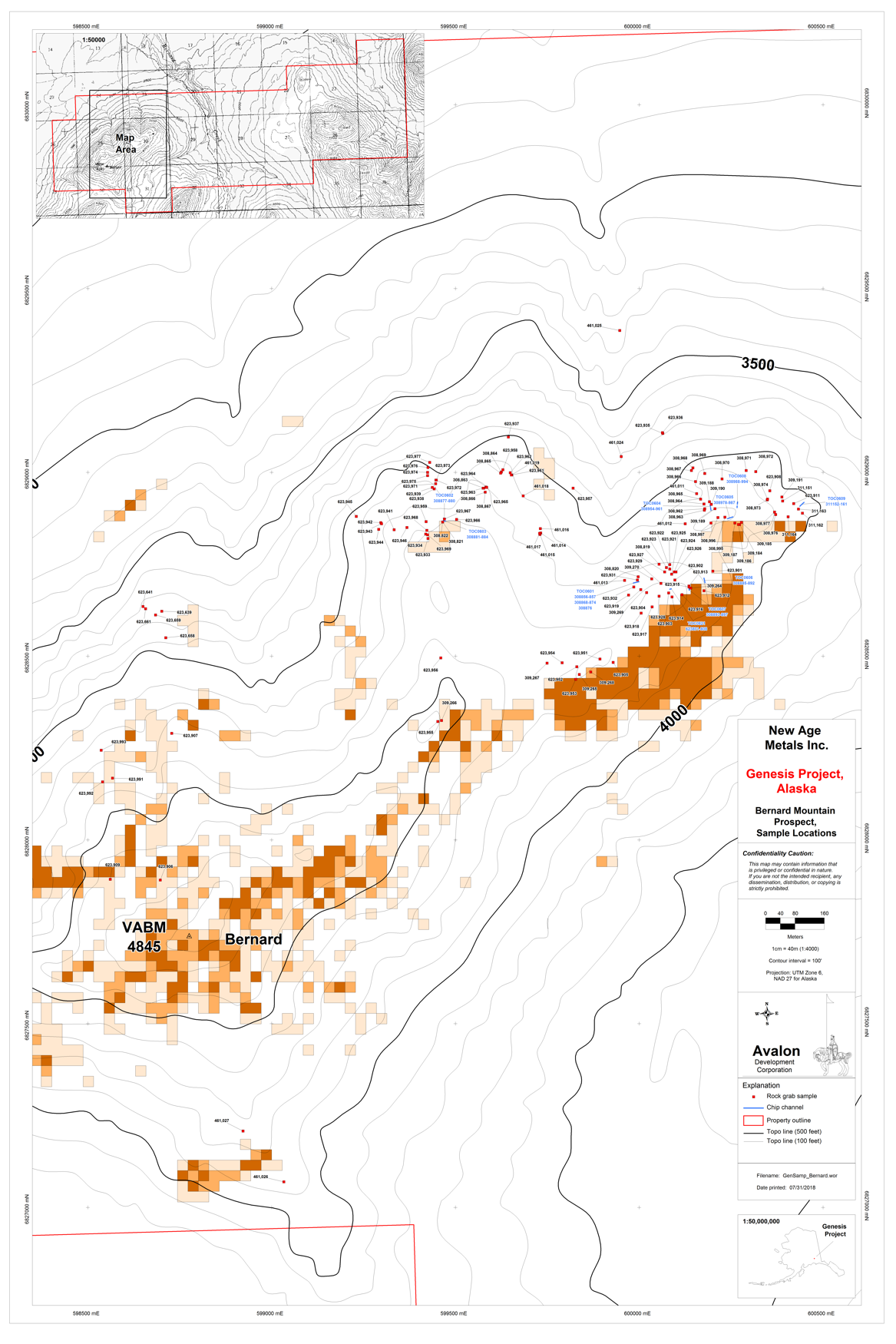 Based on previous geological and geochemical data combined with newly generated and/or interpreted ASTER, LANDSAT8, airborne magnetics and airborne resistivity data, a total of 23 exploration targets have been identified on the Genesis project. The most prospective targets include 7 separate zones on Bernard Mt. and an additional 9 zones on Sheep Hill. None of the targets on Bernard Mt. have been explored, even at the reconnaissance level, and only the western edge of one target zone, which return significant PGE-Cu-Ni mineralization, has been mapped and sampled at Sheep Hill. There has been no drilling on any of the targets identified on Sheep Hill or Bernard Mt.

The Genesis project is a PGE-Cu-Ni property located in the northeastern Chugach Mountains, 75 paved road miles north of the all-season port city of Valdez, Alaska. The project is within 3 km of the all-season paved Richardson Highway and a high capacity electric power line. The project is covered by 4,144 hectares of State of Alaska mining claims owned 100% by New Age Metals. Past exploration has revealed the presence of chromite-associated platinum and palladium mineralization and stratabound Ni-Cu-PGE mineralization within magmatic layers of the Tonsina Ultramafic Complex. Pyrrhotite, pentlandite, and chalcopyrite occur in disseminations and net textured segregations associated with platinum and palladium sulfides. There has been limited exploration over the Genesis project and there has been no past exploration drilling on the project. NAM management is actively seeking an option/joint-venture partner for this road accessible PGE and Multiple Element Project using the Prospector Generator business model.

NAM’s flagship project is its 100% owned River Valley PGE Project (NAM Website – River Valley Project) in the Sudbury Mining District of Northern Ontario (100 km east of Sudbury, Ontario). Recently the Company announced the results of the first PEA (see News Release – June 27, 2019) completed on the River Valley Project. The PEA has been developed by various independent consultants – P&E Mining Consultants Inc. (P&E) was responsible for the open pit mining, surface infrastructure, tailings facility, and project economics; DRA Americas Inc. (“DRA”) was responsible for all metallurgical test work and processing aspects of the Project; and WSP Canada Inc. (“WSP”) was responsible for the Mineral Resource Estimate. The PEA is a preliminary report, however, it has demonstrated that there are potentially positive economics for a large-scale mining open pit operation, with 14 years of Palladium and Platinum production.

The contents contained herein that relate to Exploration Results or Mineral Resources is based on information compiled, reviewed or prepared by Curt Freeman, a consulting geoscientist for New Age Metals. Mr. Freeman is the Qualified Person as defined by National Instrument 43-101 and is the owner of Avalon Development Corp. and Anglo Alaska Gold Corp, which is the vendor of the Genesis PGM Project. Mr. Freeman has reviewed and approved the technical content of this news release.

In addition, the Company announces that it has granted 1,400,000 incentive stock options to directors, officers and consultants of the Company at an exercise price of $0.05 per share for a period of five (5) years from the date of grant in accordance with the Company’s Stock Option Plan.  The Stock Options granted will be subject to vesting restrictions, acceptance by the TSX Venture Exchange and will be subject to regulatory hold periods in accordance with applicable Canadian Securities Laws.

On behalf of the Board of Directors
“Harry Barr”
Harry G. Barr, Chairman and CEO

Cautionary Note Regarding Forward Looking Statements: This release contains forward-looking statements that involve risks and uncertainties.  These statements may differ materially from actual future events or results and are based on current expectations or beliefs.  For this purpose, statements of historical fact may be deemed to be forward-looking statements.  In addition, forward-looking statements include statements in which the Company uses words such as “continue”, “efforts”, “expect”, “believe”, “anticipate”, “confident”, “intend”, “strategy”, “plan”, “will”, “estimate”, “project”, “goal”, “target”, “prospects”, “optimistic” or similar expressions.  These statements by their nature involve risks and uncertainties, and actual results may differ materially depending on a variety of important factors, including, among others, the Company’s ability and continuation of efforts to timely and completely make available adequate current public information, additional or different regulatory and legal requirements and restrictions that may be imposed, and other factors as may be discussed in the documents filed by the Company on SEDAR (www.sedar.com), including the most recent reports that identify important risk factors that could cause actual results to differ from those contained in the forward-looking statements.  The Company does not undertake any obligation to review or confirm analysts’ expectations or estimates or to release publicly any revisions to any forward-looking statements to reflect events or circumstances after the date hereof or to reflect the occurrence of unanticipated events.  Investors should not place undue reliance on forward-looking statements