On behalf of the management and directors, I am pleased to update you on the key milestones completed to date in 2022 and the goals and objectives for New Age Metals (NAM) for the balance of the year.

The Company aims to ensure that we are actively communicating with our shareholders and other stakeholders to the best of our abilities, and we want you to know that we are available to answer any questions or concerns. If you would like to receive an update, please contact us at our Rockport field office line (1-613-659-2773 or 1-800-667-1870). Alternatively, you can reach us via email at info@newagemetals.com

In April 2021, the Company started its fully funded Pre-Feasibility Study on its 100% owned River Valley PGM Project. Over the balance of 2021 and during the first three quarters of 2022, the Company put out a series announcements covering an IP survey over the Banshee Zone, an update on environmental baseline studies, an overview on metallurgical holes and the metallurgical study which is to be completed by SGS Minerals Lakefield. Several updates were given on the program to establish rhodium as a payable metal with more studies to come. In October 2021, the Company announced an updated NI-43 101 Mineral Resource Estimate. In January 2022, New Age signed an Exploration Memorandum of Understanding with Nipissing First Nation (“NFN”) to continue to promote a mutually respectful relationship with First Nations concerning NAM’s exploration programs on its mining leases and claims within the River Valley Project. NFN holds inherent Aboriginal rights and treaty rights to and over certain territory within the Company’s Project and NFN exercises those rights and asserts certain rights and claims in respect of surface and subsurface rights. In March the Company announced new palladium assay results for channel samples taken from a trench excavated on an area of mineralized outcrops in the footwall to the Dana South Zone. This Palladium mineralization could represent an opportunity to expand Dana South eastwards, or is a new discovery in the footwall to the River Valley Palladium Deposit. The Dana South Zone is located in the northern area of the Deposit, and is therefore a key zone in the ongoing Pre-Feasibility Study of the River Valley Project. Drilling began in early September in this area. In April, the Company announced positive drill results from the Banshee Zone. Drilling continues to demonstrate strength and continuity of the palladium mineralization at River Valley. This is the first drilling completed at Banshee Zone since 2004. Intersecting the palladium mineralization after almost 20 years is very encouraging, as we plan to expand the Banshee Zone by drilling multiple down-dip and footwall targets in 2022-2023. Going forward in 2022, the Company’s main objective is to complete the River Valley Pre-Feasibility Study before the end of October. Announcements will be forthcoming in regards to the progress of the Pre-Feasibility Study and exploration activities. 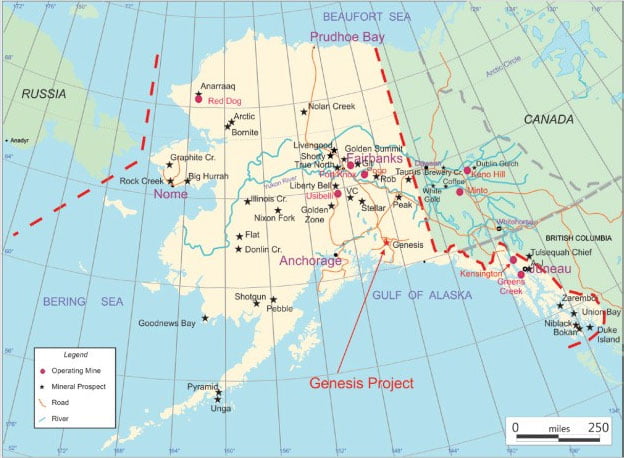 The Genesis PGM-Cu-Ni Project is an under explored, highly prospective drill ready property located 460 km south of Fairbanks, Alaska. The map figure below shows the location of the Genesis Project. The Company announced the 2021 exploration program on its 100% owned Genesis PGM-Copper-Nickel Project in Alaska on September 20. The program was completed in two phases. The objective of the program was to complete a surface rock, soil and stream sediment geochemical sampling and geological mapping program at the Bernard Mountain and Sheep Hill areas of the Genesis Project to identify additional future drill targets. The Genesis Project has never been drilled and represents an opportunity for a new discovery. The first phase of work involved the collection of rock grab samples and small soil sample pits were dug to assess soil profiles at target areas outlined from previous work. A subsequent phase of similar geochemical sampling and mapping was completed in late September. The stable land status, ease of access and superb infrastructure make this project prospective for year-round exploration, and development. The Company continues to solicit potential option/joint venture partner(s) to continue the exploration and development of its Genesis Project. 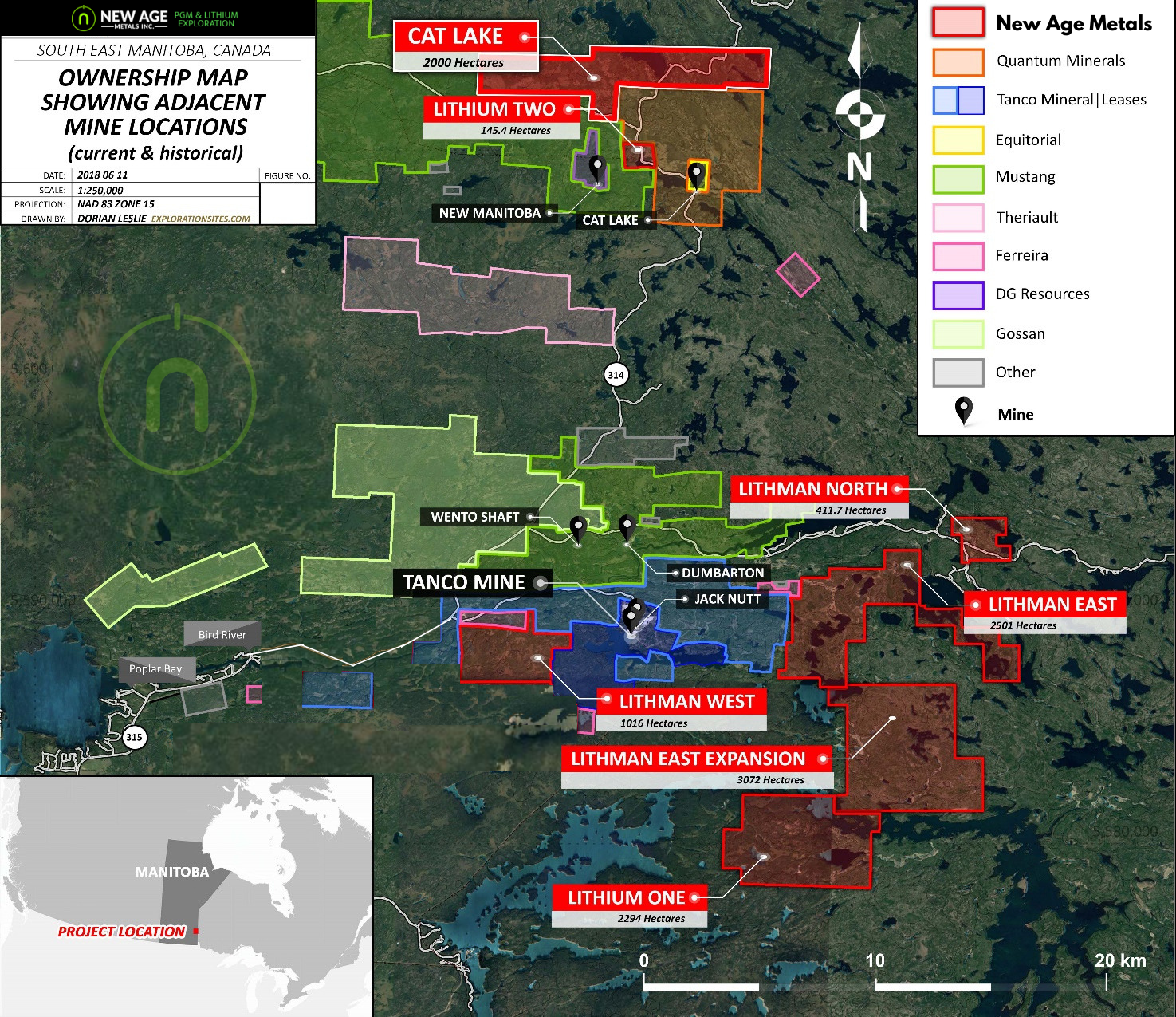 The Company’s Lithium Division has eleven Lithium and Rare Element Projects in the Winnipeg River Pegmatite Field, located in South East Manitoba and situated around the Tanco Mine. The world-class Tanco Pegmatite is a highly fractionated lithium-cesium-tantalum (LCT)–type pegmatite that has historically been mined (Tanco Mine) since 1969 for Li, Ta, Cs, Rb and Be ores. The Tanco Mine is currently Canada’s only lithium producer.

In 2021 we completed the field component of a second phase drone geophysics campaign. The drone geophysics programs are designed to identify future drill targets throughout the Manitoba project portfolio and studies have now been completed on 5 of our 11 Projects. On September 28th, 2021 the Company announced that it entered into a binding term sheet on its Manitoba lithium division with Mineral Resources Limited (MRL, ASX: MIN), the 4th largest lithium producer in the world, which has a A$12 billion market cap. Under the terms of the agreement MRL can earn up to a 75% interest in the projects as follows:

-MRL has the right to acquire an initial 51% interst by completing c$4,000,000 of exploration and development activities and C$400,000 in cash payments within 42 months from the Effective Date

In the last week of September 2021, we mobilized a field crew to our Manitoba lithium projects. The objectives of the program were to first assess site logistics and planned drill locations for the Lithium Two Project drill program. In March, 2022, the Company announced assay results from 15 diamond drill holes totaling 1,630 meters. High grade lithium mineralization intersected in 11 drill holes along the Eagle Pegmatite confirming historic drilling grades. Mineralization encountered assayed up to 2.47% Li2O over 3.0 m (estimated true width of 1.93 m) within 21.8 m (estimated true width of 14.0 m) of 0.83% Li2O. A comprehensive exploration plan for 2022 has been delivered to Mineral Resources Limited and a $1.8 million budget was approved for the year. Follow up drilling at Lithium Two will be part of the comprehensive exploration plan set to commence in spring 2022 and will include Helicopter-Borne Tri-Axial Magnetic Surveying on all remaining ground not covered by the 2021 surveys as well as recent claim acquisitions, Satellite Data Acquisition and Analysis will be completed on all the claimed areas. This is a multivariate exploration approach, combining existing geological, geochemical, and geophysical data with multiple satellite analyses, to identify new potential mineral targets. A second Project, Lithium One will have drilling done on its Silver Leaf target. Drilling is expected to commence at the end of August. Summer mapping and prospecting programs will be completed to ground truth areas of interest that have been identified from previous geophysical surveys. Announcements will be forthcoming in regards to the progress of the Company’s Lithium Division and its exploration activities.

As part of our ongoing investor awareness program, we have participated  in a series of virtual 1-1 meetings with the Mines and Money Group out of London. In May we attended the VRIC mining conference in Vancouver and in June we attended the PDAC in Toronto. In the early part of 2022, the Company has signed agreements with the Proactive group, the Junior Mining Network, the Northern Miner, a series of ads on BNN Bloomberg and digital ads with Digital257 group. I have also been busy giving different interviews with various groups and platforms. The Company’s management team has been consistently sending out the weekly industry news report as well as a monthly newsletter to interested parties.

I would personally like to acknowledge our directors, management team and technical team for their ongoing hard work and dedication to our Company. On behalf of our board of directors, I would like to thank you, our shareholders and interested parties for your continued interest and support.

"If you have not done so already, we encourage you to sign up to receive updated news, event details and industry info."