New Age Metals is the largest mineral claim holder in the prolific, Winnipeg River – Cat Lake Pegmatite Field. All of the claims are held by Lithium Canada Development, a 100% owned Lithium Division of New Age Metals. We presently have eight Lithium Projects in the region which are situated along strike of the Tanco Pegmatite and the claims encompass several pegmatite groups. The projects are located 140 kms northeast of Winnipeg, Manitoba: 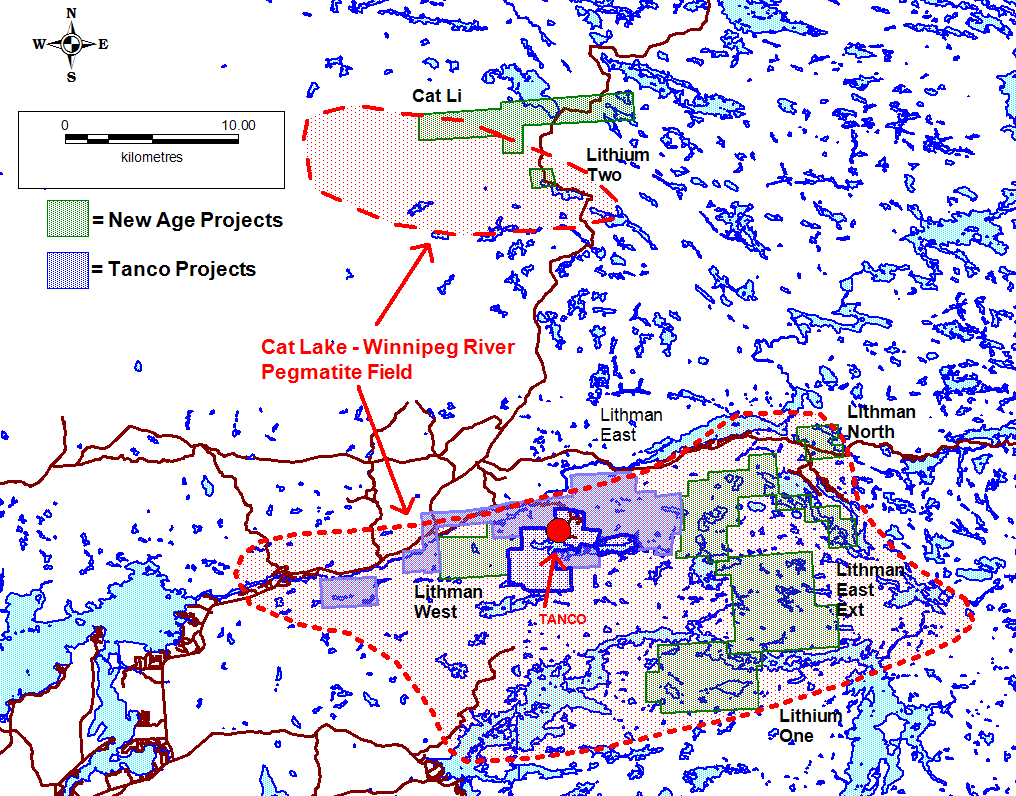 The project is geologically situated in the southern extension of the Bird River Greenstone Belt. The pegmatites are associated with the Greer Lake and Shatford Lake Pegmatite Group of the Cat Lake – Winnipeg River Pegmatite Field. The Winnipeg River Pegmatite Field hosts the World-Class Tanco Pegmatite which has been mined since 1969 at the Tanco Mine Site, in various capacities and for various commodities. This pegmatite field is hosted in the Archean age Bird River Greenstone Belt and into the surrounding granites.

All the pegmatites are of Archean age and are hosted in mafic volcanic to sediments and the surrounding pegmatitic granite. Many are complex and zoned with numerous phases of tantalum-niobium minerals, lithium-bearing minerals and REE-bearing minerals.

The Silverleaf Pegmatite is one of the most historically worked pegmatites and approximately 500 tonnes of rock removed in the 1920’s for test milling for lithium, germanium, rubidium and gallium. It is a zoned complex lithium-bearing pegmatite, with a surface exposure of approximately 80 metres x 45 metres and has been traced for over 168 meters with a maximum thickness of 31 metres. It was the largest Pegmatite reviewed during the 2016 field season. Samples taken from the Lepidolite-Spodumene Zone yielded assays from 1.30% to 2.43% Li2O, 0.15% to 2.08% Rb2O and 104 ppm to 447 ppm Ta2O5. This zone is approximately 50 metres x 20 metres in size and extends into a historic excavated open pit. A sample from the historically mined Spodumene rock pile returned values up to 4.33% Li2O.

The Company’s Phase One Exploration Program, sampled several of the other known lithium-bearing pegmatites including the Greer Lake Pegmatitic Granite. The purpose of the exploration program was to obtain modern-day assay analyses of the Pegmatites and to ground proof some of the historic pegmatite locations. Numerous Pegmatites and Pegmatite have yet to be tested.

The Annie Pegmatite is exposed on surface, for an approximate area of 15 metres x 90 metres. Samples returned assays of 0.10% to 0.64% Li2O and 0.21% to 0.81% Rb2O. Other Pegmatites returned elevated levels of Lithium. Due to the zoned nature of some of the pegmatites, additional lithium-rich zones may exist, but are not exposed on surface.

Figure 3: Pegmatite map of the Lithium One Project. 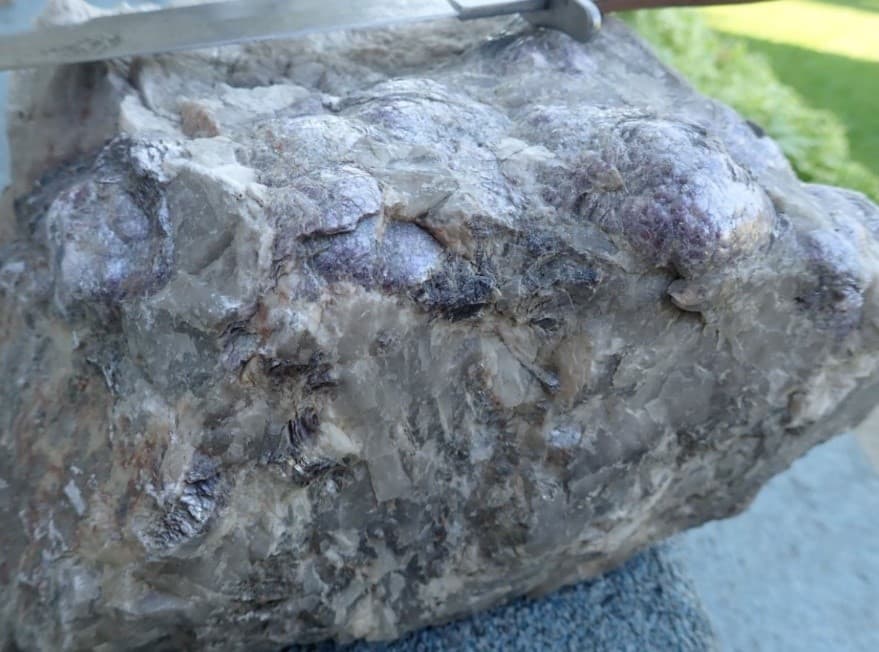 Figure 4: Ballpen Lepidolite from the Silverleaf Pegmatite, Lithium One Project

LCT pegmatites are mined around the world for their lithium, tantalum, rubidium and beryllium. The pegmatite is exposed at surface as a series of lenticular spodumene-bearing dykes, over a distance of about 823 metres with widths up to 30 meters. The Eagle Pegmatite has a general strike of 077° and a near vertical dip. The FD No. 5 Pegmatite is surface exposed over an area of 27 and 15 metres and is poorly exposed away from the main showing. The unit strikes at 80° with a near vertical dip to the north. The FD No. 5 Pegmatite appears to have not been previously drill tested.

There are several other lithium bearing pegmatites in close proximity to the Lithium Two Project.

Surface sampling over the two pegmatites during the 2016 field season yielded assays for the Eagle Pegmatite up to 2.44% Li2O and assays up to 3.04% Li2O for the FD No. 5 Pegmatite. 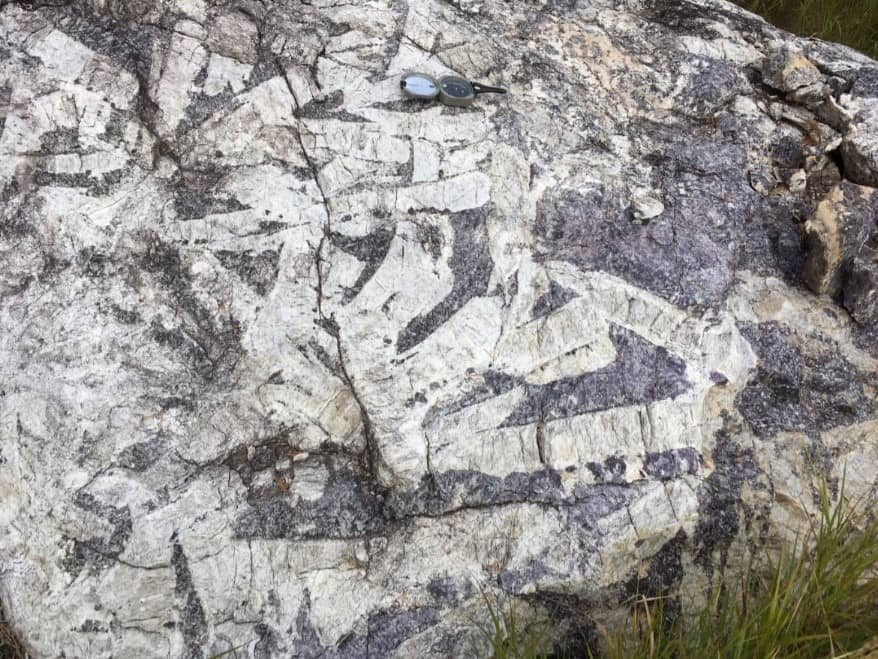 Figure 6: Spodumene blades in Lepidolite on surface at Silverleaf Pegmatite on Lithium One Project 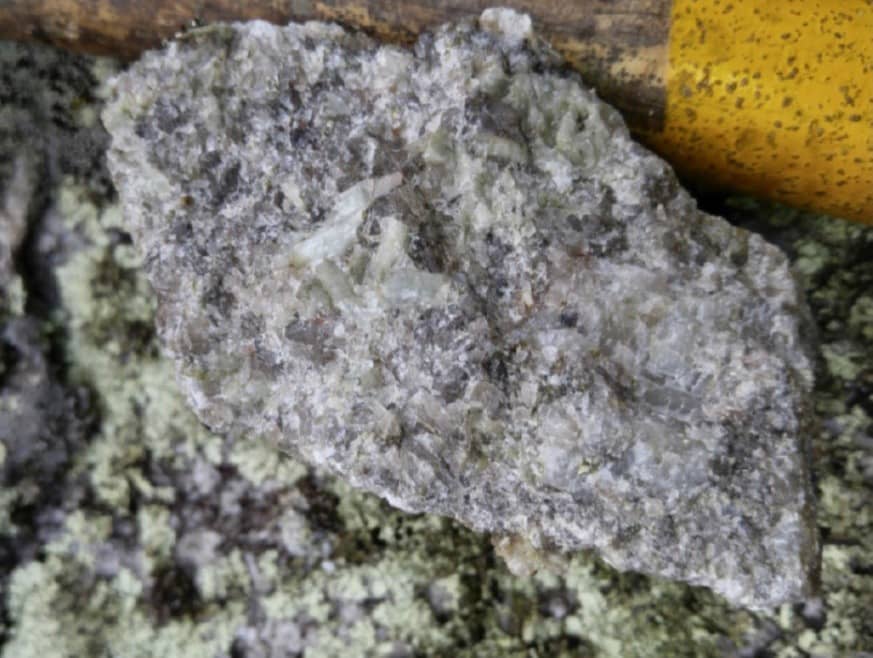 Figure 7: White Spodumene in a matrix of Quartz and Albite from the Eagle Pegmatite

The Company will be initiating a fall work program on its Lithium One project. The program will focus on surface exploration efforts to further identify drill targets for future drilling. The program is being jointly funded by New Age Metals and the Manitoba Mineral Development Fund (MMDF).

The Company believes that this work program not only provides value by way of further de-risking of the Lithium One property but we are also able to capitalize on new relief efforts made by the Manitoba government’s Mines Branch that allows for double assessment credits whereby the Company will receive two times the standard amount of assessment credits for any work completed.

The work program is scheduled to begin in the third week of September.