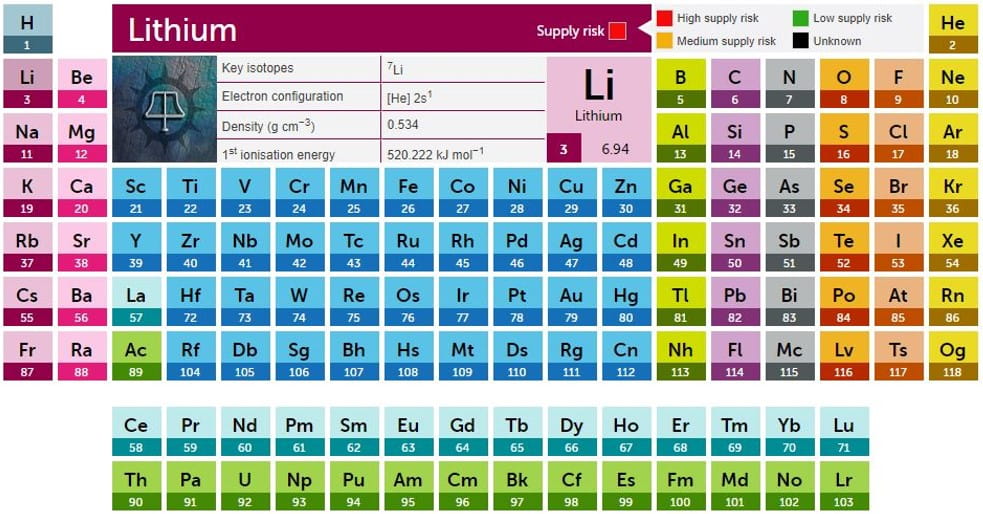 You have probably heard about lithium a few times before and don’t know a whole lot about it, other than that the batteries you use typically have lithium inside them. The following information may surprise you and be enlightening as to how important lithium is in our daily lives. The medium and long-term forecasted demand for this battery metal (that also has additional uses across a multitude of industries, listed below) is expected to dwarf current supply. Below is a list of the most common uses for lithium:

See below a graph that shows the allocation regarding the use of lithium since the year 2000:

Roskill is a company that specializes in offering Market Reports, Briefings and Consulting Services for the Metal, Mineral, Carbon and Chemical Industries. Their researchers have found that Lithium demand is forecast to increase by over 20% per year, with demand from battery applications increasing by over 25% per year through to 2028. Meanwhile demand for lithium from industrial applications such as ceramics, greases and glass is also expected to rise, albeit at a more modest rate of 2-3% per year. With this backdrop the lithium industry will require significant investment in additional supply from new mines, process plants and from the nascent recycling industry.

So, where’s the future supply coming from?

Let’s first look at current lithium supply which originates in two main forms, ‘brines’ or ‘hard-rock’. Both forms occur naturally in the earth, but the methods of extraction for each differ. Currently, China dominates the global battery production industry which means they control a lot of lithium supply, something U.S. President Donald Trump wants to change. Recent geopolitics (U.S. – China trade war) and resource nationalism (Indonesia nickel ban) are causing mining companies to reconsider where they operate. This might mean that lithium mineral exploration and development projects in North America are looking more attractive than ever to producers, however the current glut of lithium supply is depressing investment in such projects worldwide.

As described by the United States Geological Survey (USGS), lithium brine deposits are accumulations of saline groundwater that are enriched in dissolved lithium. Although abundant in nature, only select regions in the world contain brines. In closed basins in arid regions, lithium salts can be extracted at a profit. Brine is pumped to the surface to be evaporated in a succession of ponds, each transfer to a new pond achieves a higher purity until further processed in a chemical plant with the final product from these chemical plants being lithium carbonate. South American countries Chile and Argentina are where majority of the lithium produced from brines originates, as well as Nevada, USA to a much smaller extent.

Lithium can also be extracted from lithium clays (hectorite) and petroleum brines (petrolithium). The commercial scale production of lithium from clays is yet to be realised, which has, in the past, discouraged potential financers, who have favoured ‘lower-risk’ investments in lithium mineral or brine projects. Petrolithium is a new approach that focuses on concentrating lithium and other elements from abundantly available wastewater (brine) that accompanies oil and gas production. According to MGX Minerals Inc, this new technology could dramatically alter the energy landscape in the coming decades.

Brines are also host to potash, iodine, and numerous other minerals.

When investors read about mining companies and their operations, the are most commonly reading about hard rock operations. Hard rock mining has been around since the bronze age and miners over time, have optimized their hard rock operations to achieve not only extremely efficient production, but also develop sustainable practices.

Lithium found in ‘hard rock’ are a part of minerals hosted in Pegmatites. Pegmatites are intruding rock units which form when mineral-rich magma intrudes from magma chambers into the crust. As the last of this magma cools, water and other minerals become concentrated. These metal-enriched fluids catalyze rapid growth of the large crystals that distinguish pegmatites from other rocks. Pegmatites form thick seams called dikes that intrude into other rocks and can measure anywhere from a few centimetres to hundreds of metres.

Within Pegmatites is a lithium-bearing mineral known as Spodumene, which occurs as prismatic crystals that range in color to be either white, yellowish, purplish, yellowish-green or emerald green. Lithium from pegmatites can be used to create lithium carbonate or lithium hydroxide, the latter of which is becoming more desirable by battery producers. Australia is the leading producer of spodumene (in 2018 spodumene production form Australian mines totalled approximately 180,000 tonnes) and are therefore the industry leader in this respect. Lithium can also be extracted from minerals like petalite, lepidolite, and amblygonite.

Based on what you’ve just read you might be thinking to yourself, “brines sound easier to extract lithium out of when compared to hard rock”. In some ways this is true, but experts in this rapidly growing industry are anticipating a dramatic scale up in the extraction of lithium from pegmatites, forecasts that are already proving true. There are a few reasons for this, which we try to explain in this article.

Not all batteries are created equal

Battery technology, which is forecasted to be the main ‘driver’ of future lithium demand due to the anticipated rise of battery electric vehicles, is evolving and becoming more advanced over time. Something that is a primary focus is ‘energy density’, which ultimately means how much energy can be stored within certain dimensions. Battery producers such as Tesla and BYD are over time adjusting the ratios of the numerous metals used to produce each component within batteries, including nickel, cobalt, manganese, graphite and of course, lithium.

Industry-wide, there is a push toward cathodes with higher nickel content, namely NCM 811 cathodes, which include eight parts nickel, one part cobalt and one part manganese. These cathodes have a higher energy density, a longer lifespan and provide a better driving range when used in EVs.

As it turns out, lithium hydroxide is better suited in the production of the batteries with NCM 811 cathodes when compared to its alternative, lithium carbonate. Although lithium carbonate can be converted into lithium hydroxide, it comes at an additional cost. This is causing brines to look less attractive to battery producers, leading to industry players scaling up or increasing their hard rock mine assets.

See below, a list of reasons why hard rock lithium is becoming the more common source of lithium production rather than brines:

What’s all this really mean?

Ultimately, the world will increasingly need more lithium regardless of its origin. However, the trend towards battery producers requiring higher quantities of lithium hydroxide derived from spodumene will result in the declining use of lithium carbonate originating from brines. In real terms, the use of lithium carbonate may increase but in terms of market share for the battery industry it will decrease.

This is an opportunity not only for mining companies to expand their focus on hard rock lithium projects to meet future demand, but also presents a business case for external investment in such projects. Investors that complete their due diligence may be able to benefit from the exponential increase in demand that is anticipated by the industry players. While the rate of adoption globally for hybrid electric vehicles and battery electric vehicles may yet to be fully determined, there is no doubt that batteries will be used for the growing number of these vehicles as well as portable electronics.

For information on New Age Metals’ Hard-Rock Lithium Projects in Manitoba, Canada, please send any inquiries to info@newagemetals.com or call us at 1-800-667-1870.