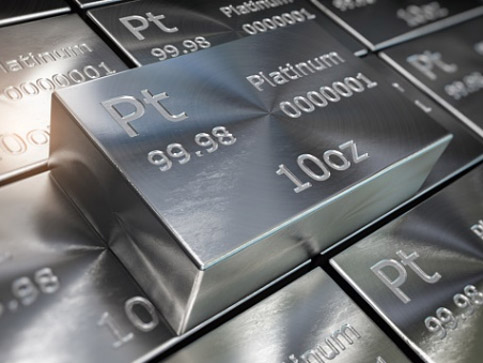 This article is the third in a series of three focused on the fundamentals related to supply and demand of Platinum Group Metals (PGMs) including Palladium, Rhodium and Platinum. If you have interest in Rhodium and/or Palladium, consider reading our previous blogs on these metals.

Platinum, a dense, precious, silverish-white precious metal, is the most well-known out of the group of six Platinum Group Metals. Its physical characteristics and chemical stability make it useful for industrial applications. In 1557 an Italian scholar, Julius Scaliger, wrote of a metal from Spanish Central America that could not be melted by any fire (platinum has an extremely high melting point at 1768°C / 3215°F). Then, in 1735, Antonio Ulloa encountered this curious metal, but as he returned to Europe his ship was captured by the Royal Navy and he ended up in London. There, members of the Royal Society were most interested to hear about the new metal, and, by the 1750s, platinum was being reported and discussed throughout Europe.

Since the 18th century, platinum has found many uses across a multitude of industries, listed below in order of most common to least common:

Platinum demand for auto-catalysts is largely concentrated in commercial vehicles or passenger vehicles that run using diesel. Platinum is better suited for treating vehicle emissions from diesel, while vehicles that run using gasoline primarily utilize palladium alongside smaller amounts of platinum. Europe used to be the leader in diesel passenger vehicle sales, with about 50% of new sales being in this category until the beginning of 2015 when this trend reversed.

In late 2015, it was reported that Volkswagen admitted to installing secret software on 580,000 U.S. diesel vehicles that allowed them to emit up to 40 times legally allowable emissions. Volkswagen cars being sold in America had a “defeat device” – or software – in diesel engines that could detect when they were being tested, changing the performance accordingly to improve results. VW admitted that about 11 million cars worldwide were fitted with the so-called “defeat device”.

As the scandal unfolded, other major automakers, including Daimler and Fiat Chrysler, were also caught using such devices and received fines accordingly. Volkswagen alone has paid over US $30 billion worth of fines related to the cheating, and European sales of diesel vehicles have steadily declined in the wake of the scandal. As a result, platinum demand for the region has declined—auto-catalysts are the leading demand segment for platinum—negatively affecting the price for platinum.

Demand for platinum jewelry has also been on the downtrend over the past few years. This is largely due to the fact that China is the biggest consumer of platinum jewelry, but its citizens are increasingly interested in gold jewelry after platinum lost much of its lustre as the price more than halved from over US $1,865 in 2011 to US $860 today. In response to this loss of valuable market share, some major South African producers fund various organizations that aim to promote platinum use in jewelry and as an option for long term investment.

From a functional standpoint, platinum is arguably more appropriate than gold for jewelry with high quality diamonds for two reasons: platinum is stronger than gold and less likely to lose diamonds and the white colour of platinum showcases the clarity of quality diamonds better than gold. For the latter, platinum will continue to be used in high quality jewelry and the industry could experience a resurgence if platinum’s price rises to a point where it is seen as prestigious.

Fuel cell vehicles, which are vehicles that operate by way of hydrogen as a fuel source, may be an area of significant opportunity and demand growth for platinum in the coming decades. It is likely that hydrogen technology has more potential to gain traction in commercial transport and stationary power. With the world slowly transitioning to being less reliant on carbon, fuel cells offer a desirable source of green energy, depending on how the hydrogen fuel is created.

Fuel cells that use “green” hydrogen fuel are completely carbon-free, with their only by-products being electricity, heat, and water. Fuel cells generate electricity through an electrochemical reaction, not combustion. The cells produce electricity by combining hydrogen (the fuel) and oxygen (from air) over a catalyst such as platinum.

Historically, fuel cells required large loadings of platinum (>30g-60g), which restricted mass-adoption due to the relatively high price of platinum. However, there was an announcement made in 2019 by Bosch (a German multinational engineering and technology company) about a breakthrough in fuel cell technology: their fuel cells only require one tenth the platinum used in current fuel cell vehicles. Lowering the initial cost for this technology removes a barrier for mass adoption, and so this development by Bosch is positive for both companies producing fuel cells and platinum.

Privately-owned Bosch, which signed a deal in 2019 with Powercell Sweden AB to mass-produce fuel cells, said its fuel cell design was not finalised, but it expects them to use only as much platinum as a diesel catalytic converter. According to SFA Oxford, new platinum demand from hydrogen power will total more than 400,000 ounces by 2030 from demand of less than 50,000 oz of platinum production today.

Hydrogen can be produced from a variety of domestic resources, such as natural gas, nuclear power, biomass, and renewable power like solar and wind. Hydrogen developed by way of renewable power is the best way to maximize reductions of greenhouse gases and enhance fuel cell’s purpose as less pollutive compared with the use of fossil fuels.

Currently there is no widespread availability of clean hydrogen, but this is expected to change as industries with the most potential for fuel cell adoption (such as commercial fleets, stationary power) make the transition. One instance of companies seeking to capitalize on the expected transition to hydrogen is Airbus, which recently unveiled three visual concepts for “zero emission” airplanes to be powered by hydrogen.

The majority of platinum produced annually originates from South Africa, where a handful of companies are responsible for over half the world’s mined production. These companies are frequently confronted with various operational frustrations and an uncertain regulatory environment.

While the mineral endowment of platinum in South Africa is relatively abundant, investment in new supply sources for platinum has dwindled over the past decade as platinum demand weakened resulting in oversupply and depressed prices. Ultimately, this lack of investment could lead to a supply crunch as reserves are depleted and not replaced through exploration and development.

Mineral exploration and development projects with proven resources of platinum, located in well-established, reputable mining jurisdictions, may be of significant interest to major mining companies as South African reserves are depleted. The appeal of such platinum projects could be accelerated by the transition to world that is less reliant on fossil fuels.

Ultimately, the depressed prices of platinum observed today may provide investors with an opportunity to invest in the precious metal, or companies with quality platinum projects. For a commodity with so many industrial uses that could play a large role in the global transition to a less carbon-intensive future, industry proponents agree that platinum has the potential to significantly appreciate in value over the coming years.

We encourage you to review New Age Metals River Valley Project as an opportunity to gain levered exposure to Platinum Group Metals, including platinum. The project hosts a mineral resource estimate of 2.9 Moz Palladium Equivalent (PdEq) in the measured and indicated classification and another 1.1 Moz PdEq. The Palladium Equivalent formula is based on certain assumptions made including 24-month trailing average metal price for the seven different metals that make up the mineral resource, as well as estimated concentrate recoveries, estimated smelter payable amounts and estimated refining charges.

Platinum contributes approximately 626,000 ounces in the measured and indicated classification at River Valley with an additional 252,000 ounces in the inferred classification. The project is a multi-million-ounce, district-scale asset located in a well-established mining jurisdiction owned 100% by New Age Metals. River Valley presents a wealth creation opportunity for investors looking for undervalued metal ounces in the ground in North America that will assist in our society’s transition to a green future.