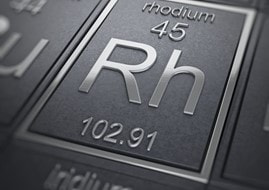 This article is the second in a series of three focused on fundamentals relating to the supply and demand of Platinum Group Metals (PGMs), including palladium, rhodium and platinum. If you are interested in palladium, we urge you to read our previous blog post, “Will Palladium Continue its Golden Performance?”.

Rhodium (Rh) is a relatively unknown precious metal, possibly due to its global demand being concentrated in auto-catalysts, where it is used in smaller quantities alongside sister PGMs palladium and platinum. You may have become aware of rhodium lately because of the metal’s strong price performance, currently trading above US $10,000/oz, which makes it 5X more valuable than gold (only diamonds are more valuable). Below, we explain what rhodium is, how it is used, where supply originates, what demand may look like in the future. We will also touch on New Age Metals’ efforts pertaining to rhodium.

Rhodium, one of six PGMs, is a silver-white metallic element that is highly reflective and strongly resistant to corrosion. It is considered the rarest and most valuable precious metal in the world — far more so than gold or platinum. Rhodium’s primary use is in catalytic converters of automobiles, where it reduces the amount of nitrogen oxides (NOx) exhaust gases emitted into the atmosphere. In 2019, almost 90% of rhodium demand was from the auto-catalyst sector. Rhodium is a very special metal in terms of its performance in converting NOx into harmless gases, and will continue to be the metal of choice for the control of NOx.

Rhodium is used in other industries to a far lesser extent:

Overall, the rhodium market is relatively small at just under 1.15 million ounces (MOz) consumed in 2019. This tiny amount equals only 32 tonnes of material, which could easily be contained in a single semi-trailer truck.

Mined supply of rhodium in 2019 was over 750,000oz and recycled supply was 315,000oz, resulting in a deficit of approximately 50,000oz. Rhodium supply is inelastic to demand, which means that if demand increases, there is no fast way to ramp-up production or supply. There are many reasons for this: the primary reason being rhodium content in the earth’s crust is extremely rare, and the metal is mined as a by-product of platinum and palladium mining or nickel mining. There is no such thing as a primary rhodium mine, and the major producers are all located in South Africa. South Africa produces over 85% of the global rhodium supply annually, with majority of this supply being generated by the mining companies listed below (rhodium production listed as a percentage of overall mining production):

Due to the very deep nature of aging mines in South Africa that produce by-product rhodium, the metal supply has been largely stagnant in recent years. With platinum in oversupply and depressed in price since 2015, the South African mining companies face a conundrum: if these companies choose to mine more platinum to take advantage of the by-product rhodium, there is risk of oversupplying the platinum market and depressing prices further. Additional issues that plague the mining sector in South Africa include:

Considering that emissions legislation globally is tightening, does all of this mean that rhodium prices will keep rising? Although it is likely that rhodium’s price could continue to be elevated for the foreseeable future, the substantial premium to palladium and platinum may ultimately cause a decline in demand and price.

While rhodium is superior at what it does and loadings of the metal will always be present in auto-catalysts, it can be partially substituted with higher loadings of palladium. With considerable palladium supply coming from Russia and North America, palladium is more diversified than that of its rarer sister metal, rhodium, and therefore easier for auto-catalyst manufacturers to procure. The insecurity of rhodium supply became increasingly evident during the coronavirus-related lockdowns implemented in South Africa, which saw mining companies cease operations for weeks until the government allowed up to 50% workforce capacity of underground mining operations.

Stephen Forrest, the co-founder of a leading PGM research firm SFA Oxford (bought by the South African mining company Sibanye Stillwater in late 2019), was quoted saying he believed that semi-fabricators would start to substitute rhodium in auto-catalysts with palladium. However, if or until such substitution is possible (global palladium supply is also in deficit relative to demand), there is likely to be more upside for rhodium prices to reach new highs in the coming years.

Are you interested in gaining exposure to rhodium, and seeking to invest in mineral projects that contain rhodium mineralization and/or PGMs palladium and platinum?

If so, please consider the merits of NAMs (TSXV) River Valley Palladium Project, where the company has 2.9MOz of NI 43 – 101 compliant palladium equivalent (PdEq) measured and indicated with another 1.1MOz PdEq in inferred. That Mineral Resource Estimate (dated January 2019) includes Rhodium. In June 2019, the company completed a Preliminary Economic Assessment on the River Valley Project. One of the recommendations made in the PEA was to further identify any rhodium mineralization that may be recoverable as a payable metal during production. The company has near-term plans to assay more River Valley drill core for rhodium content, thereby raising interest and increasing marketability of the River Valley PGM deposit, which being in Ontario (Canada) is in a very safe and secure mining jurisdiction with established infrastructure.